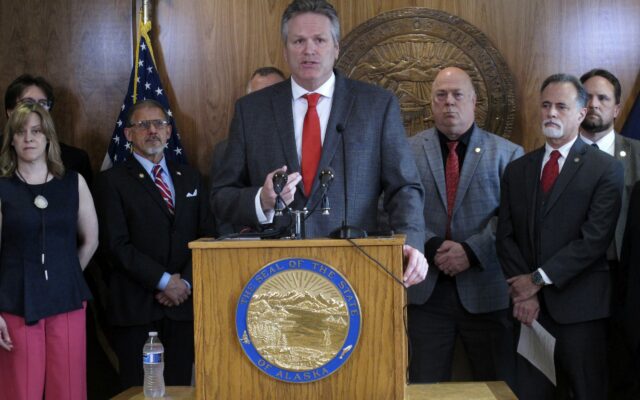 JUNEAU, Alaska (AP) — Alaska Gov. Mike Dunleavy urged residents along a huge swath of rural western Alaska on Wednesday to prepare for what forecasters called a strong storm that is expected to pack high winds and could result in areas of coastal flooding.

“In terms of how this is going to manifest itself, it’s difficult to say,” Dunleavy told reporters but added that residents should anticipate “some major impacts” if forecast models hold.

Warnings issued by the National Weather Service called for wind gusts in the 70 mph range for parts of the western Arctic coast through Thursday and the potential for water levels to reach up to 7 feet (2 .1 meters) above normal high tide line late Thursday and into Friday morning. Flooding in low-lying areas and erosion also was expected along the Chukchi Sea coast.

Forecasters have said the main impacts are expected in communities farther north than those hit hard last month by the remnants of Typhoon Merbok. Some communities pummeled by the September storm were under coastal flood or high surf advisories.

Glenn Steckman, Nome’s city manager, said officials in that community — famous for being the finish line of the Iditarod Trail Sled Dog Race — did not expect the latest storm to have the kind of impact on Nome that the September storm had.

That storm brought tidal surges and high winds that ripped up main roads in several communities, including Nome, and damaged homes across a broad, sparsely populated swath of Alaska.

Ryan Anderson, commissioner of the state transportation department, said officials were watching the forecast as they continued road work as part of the ongoing recovery process.