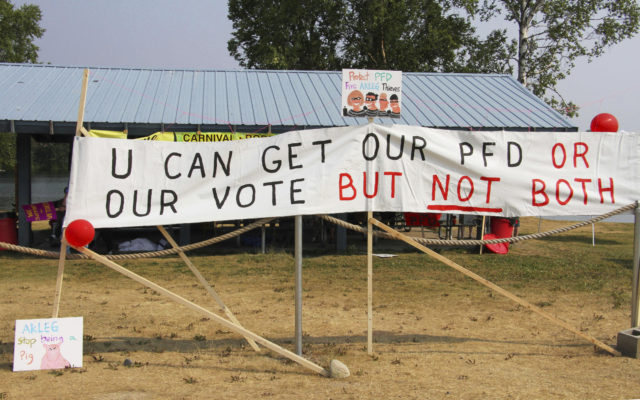 Alaska House Speaker Bryce Edgmon says he doesn’t see a willingness by the House to appropriate more money toward an oil-wealth fund check for residents without a change to the dividend program going forward.

Gov. Mike Dunleavy, in a video released Monday, said he would accept the roughly $1,600 Permanent Fund dividend passed by lawmakers. But he said he views it as a partial payment and would fight for more money. He said he expected a fall special session.

Edgmon said Monday he is not aware of Dunleavy having direct conversations with anyone in the House leadership team about that.

Dunleavy did not mention a formula change in his address. He has previously maintained that Alaskans, through a public vote, should get a say on any potential changes.

Alaska Gov. Mike Dunleavy has accepted an oil-wealth fund check of about $1,600 for residents this year, acknowledging the votes do not exist in the Legislature for the larger amount he’d been seeking.

He said he will not give up the fight.

In a video message, Dunleavy says he views the amount approved by lawmakers for Alaska Permanent Fund dividends this year as a partial payment. He says he expects a fall special session to focus on the dividend.

He says he won’t give up until the funds for a full dividend are approved.

Dunleavy has pushed for a dividend in line with a longstanding calculation that has not been followed since 2016. That would equate to checks of about $3,000 this year.

Many lawmakers see the calculation as unsustainable.

Alaska Gov. Mike Dunleavy is expected to announce his plans Monday for paying this year’s check to residents from the state’s oil-wealth fund.

Dunleavy’s office says he will not hold a news conference, but instead will release a video.

Dunleavy campaigned on a Permanent Fund dividend paid in line with a longstanding calculation that has not been followed since 2016 as the state has grappled with a budget deficit. Such a dividend would equate to checks of about $3,000 this year.

Lawmakers instead asked Dunleavy to consider a roughly $1,600 dividend this year. Many say the calculation is at odds with a law passed last year seeking to limit what can be taken from permanent fund earnings for dividends and government expenses.