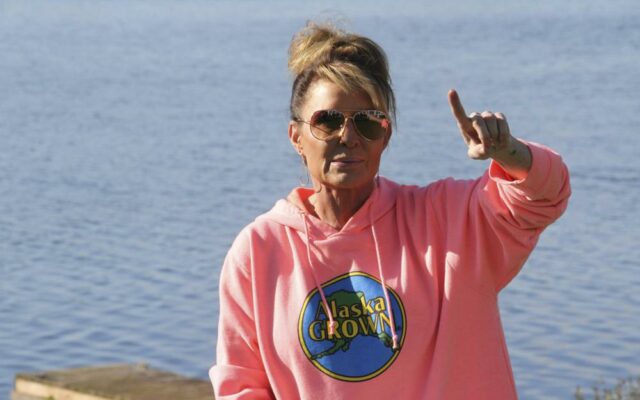 WASILLA, Alaska (AP) — Alaska U.S. House candidate Sarah Palin called on fellow Republican Nick Begich to drop out of the race Monday, holding a news conference in the same place where on a holiday weekend more than a decade ago she announced plans to resign as Alaska’s governor.

“He keeps calling me a quitter,” she told reporters, adding later: “And now he wants me, the one who is clearly the only true conservative in this race who can win, he wants me to quit! Now that’s the real joke. Sorry, Nick. I never retreat, I reload.”

Monday was the deadline for candidates to withdraw from the November general election. Begich, who was critical of Palin during the campaign, seeking to cast her as a quitter and questioning her motives in running, said Monday his campaign is “confident that we are on a positive trajectory to win in November.”

“Ranked choice voting showed that Palin simply doesn’t have enough support from Alaskans to win an election and her performance in the Special was embarrassing as a former Governor and Vice Presidential candidate,” he said in a statement Monday.

Palin, the 2008 Republican vice presidential nominee, and Begich lost an Aug. 16 ranked choice special election to serve the remainder of the late Republican Rep. Don Young’s term to Democrat Mary Peltola. The results were tabulated Wednesday and certified Friday. Peltola led in first choice votes heading into the tabulation rounds, followed by Palin and then Begich. Begich was the candidate eliminated first.

Of the Begich voters who ranked a second candidate, 36% chose Peltola and about 64% chose Palin.

A spokesperson for Peltola’s campaign, Josh Wilson, said Peltola will be sworn in on Sept. 13.

Peltola, Palin and Begich also advanced from the August primary to the November general election, with the winner of that contest to serve a two-year term. They will be joined by Libertarian Chris Bye, after the fourth place finisher in the primary, Republican Tara Sweeney, withdrew.

Voters in 2020 approved changes to Alaska’s elections process, scrapping party primaries in favor of open primaries in which the top four vote getters, regardless of party affiliation, advance to the general election, and instituting ranked voting for general elections. The special House election was the first ranked vote election under the system.

Palin’s news conference at her lakeside home in Wasilla Monday was interrupted at points by the noise from floatplanes passing by.

She again defended her decision to resign as governor in July 2009, a decision she announced July 3 that year. She said Monday that being governor was a job she wanted to have but resigning was the “right thing.” She cited in part ethics complaints that she said were frivolous and had become distractions.

Begich last week questioned Palin’s ability to win an election and she urged him to drop out, a call she reiterated Monday.

Palin said it would make “no sense” for her to drop out. If Begich doesn’t withdraw, “then you’ll be able to see us not just talking the talk but walking the walk that we’ve not yet begun to fight,” she said.