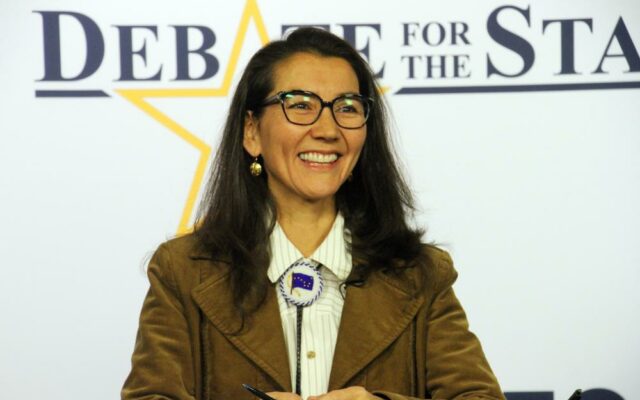 JUNEAU, Alaska (AP) — Alaska U.S. Rep. Mary Peltola in a televised debate Wednesday called partisanship a threat to the country as the Democrat sought to make the case for reelection to the seat she’s held since September against challengers including Republican Sarah Palin.

Peltola beat Palin and Republican Nick Begich in a ranked choice August special election to fill the remainder of the late Republican Rep. Don Young’s term. Those three, along with Libertarian Chris Bye, are running in the Nov. 8 election for a full, two-year term, starting in January. That election also will be ranked choice. All four candidates participated in the debate.

Palin and Peltola have been cordial to one other; Peltola’s time in the state House overlapped with Palin’s time as governor, and the two had kind words for each other Wednesday night. But Palin has railed against Alaska’s ranked choice voting system, approved by voters in 2020 as part of an elections overhaul. Palin, in an opinion piece published by the Anchorage Daily News this week, said the system, used for the first time in the special election won by Peltola, had “produced the travesty of sending a Democrat to Congress to represent Alaska, one of the reddest states in the country.”

Palin has joined Begich in urging voters to “rank the red,” or the Republican candidates.

The ranked vote system was not among the topics raised during the debate, which touched on issues such as inflation concerns, suicides among military veterans and the pandemic.

When asked if the government should be able to mandate vaccinations, Begich, Bye and Palin said no. Peltola said she did not think they should be required “nationally” but said she has concerns about pandemics.

Peltola, who has cast herself as a coalition builder and called for more civility in politics, said partisanship “is the No. 1 threat to our country both in terms of foreign policy and domestic policy.” She said policy makers should work together on those issues. But she said there is “a tradition now in America of tearing one another down, just to get into office.”

Begich said political division is an “outgrowth” of the differences in philosophy of the Republican and Democratic parties. He said having those discussions is good.

Peltola later praised Palin’s willingness to work across party lines while governor. During a portion of the debate in which candidates asked each other questions, Peltola asked Palin how she might work with the Biden administration and Democrats in Congress.

Palin said while she and Peltola have different policy positions, she has “great respect” for Peltola.

“Hopefully my track record proves that, again, I’m able to play as a teammate. I know what it takes to win,” Palin said. The 2008 Republican vice-presidential nominee, who stood next to Peltola on the debate stage, said this is a period in which there is “politics of personal destruction and lies, in campaigns especially,” and that it was “heartening to get to stand beside somebody who gets it.”

Bye said many Alaskans are “terrified when they hear bipartisan because what that really means is both parties are getting together to gang up on taxpayers.”

Begich said it’s “important that we communicate with one another but I’m not about to hold hands while we go over the fiscal cliff.”

Begich came out hard against Palin ahead of the special election, questioning her seriousness as a candidate and casting her as quitter. Palin resigned as governor partway through her term in 2009. Palin’s is a household name; she is well known in conservative politics and has appeared on reality TV programs. She has argued that she would use her profile to the benefit of Alaska.

Begich has also taken aim at Peltola, seeking to tie her to House Speaker Nancy Pelosi and President Joe Biden.

Peltola wore one of Young’s bolo ties, which was presented to her last week at the Alaska Federation of Natives convention in Anchorage by one of Young’s daughters.